As you may already know, Illinois moved to the Bridge Phase late last week, which is the final step before the full reopening of Phase 5. But how does that affect the Peoria live theatre for this summer? In a nutshell, they are now allowed to fill their venues to 60% of capacity, up from only 25% in Phase 4. That’s great news for those of you who miss enjoying live theatre! Below is a summary of the various area theatres’ plans for this summer.

Corn Stock Theatre recently announced that even though their planned 2021 summer season (it was basically their 2020 summer season which was postponed), they will have 3 shows in the tent this summer. They include My Way: A Musical Tribute to Frank Sinatra running July 8 – July 25, The Complete Works of William Shakespeare (abridged) (revised) running July 29 – August 15, and The Musical of Musicals (The Musical!) running August 19 – September 5. All three shows will run Thursdays through Sundays at 7:30 pm each night. Tickets are available in pods of 1, 2, 3, or 4. There will be a limited number of seats in the pit (only available in pods of 2) and those seats can only be reserved by calling 309-676-2196. General ticket sales will begin Monday, June 14. Former season ticket holders will be able to order tickets beginning Tuesday, June 1. No season tickets will be sold for this season.

“I cannot express how excited I am that live theatre is returning to the Tent this summer! We have done our best to continue to entertain through virtual shows but there is nothing like hearing the roar of laughter or applause after a beautiful song. I hope our patrons are as eager as we are to have the show go on!” said Corn Stock Board President, Erin Craig. For more information about Corn Stock Theatre’s 2021 season, visit http://cornstocktheatre.com

The Barn III Dinner Theatre has already re-opened with their Mother’s Day show (Hats Off to Mom) earlier this month but will have three additional shows for 2021. Owner Abby Reel said when asked about their upcoming summer show, “The Barn is eager to welcome its beloved audience back to the Barn after this great pause in operation. Customers can now enjoy a fully plated dining experience with no more buffet lines or juggling of plates. The Barn staff will bring the buffet line to you at your table – come hungry and ready to enjoy exceptional service, wonderful food, and great entertainment right here in the cornfields of central Illinois”.

Steve Cordle, Executive Director for Eastlight Theatre, is awaiting direction from East Peoria High School where their shows are presented to learn when the theatre will be allowed to produce shows for this summer and the rest of 2021. When more details are available, this information will be updated, or visit https://eastlighttheatre.com for the latest update on their 2021 season.
6/8/2021 Editor’s Update:  Eastlight Theatre announced their shortened season which includes Singin’ in the Rain running July 30 – August 1 and August 1 – 4, a show to be announced running September 10 – 12 and September 15 – 18 and finishing off the year with 30th Anniversary of Joseph & the Amazing Technicolor Dreamcoat on December 3 – 5 and December 8-12. 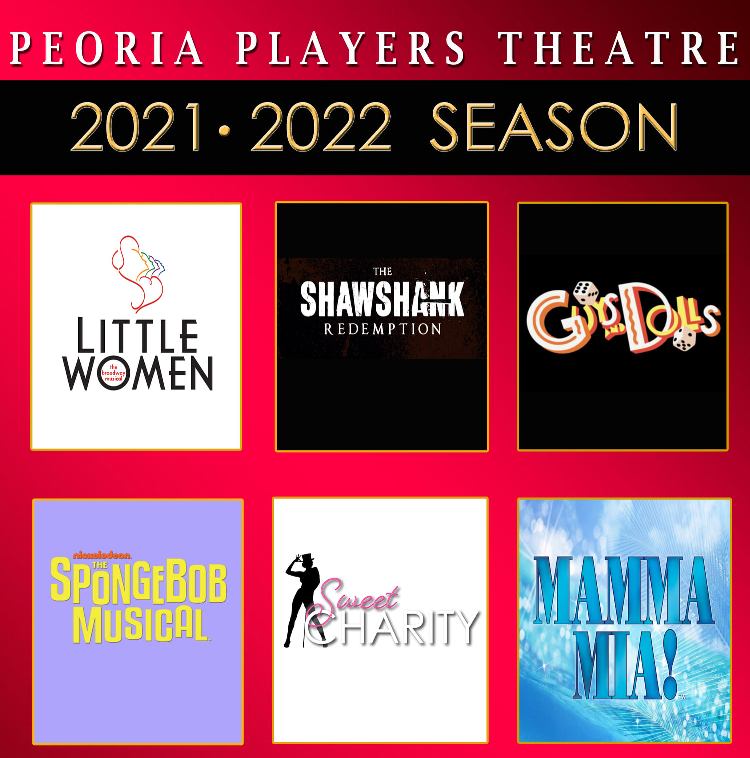 Peoria Players normally produces a youth theatre musical in early August, but according to Theatre Manager Nicki Hatschke, “We would have to hold auditions in June, and with the situation still being unknown, we felt it was just a bit too early. But we are planning on opening in September with Little Women.” She continued, “We are hopeful that we will be able to offer more seating once we begin selling season tickets in mid-July.” For full details on Peoria Players full 2021-22 season, visit http://www.peoriaplayers.org/current-season.html

The Illinois Shakespeare Festival held at Ewing Manor in Bloomington will be back in 2021, although with an abbreviated season. Normally they produce three to four shows during a season, but this summer they will produce two, A Winter’s Tale running July 9 – August 6 and Measure for Measure running July 2 – August 4. Derek Munson, Managing Director of the Festival said, “The shows are scaled back because we lost so much revenue last year. Everything will be minimal this year. We are looking forward to next year which will be our 45th season.”

The ISF will not offer concessions or merchandise this season (although you can purchase merchandise online) but patrons are welcome to bring their own food and drinks to picnic on the lawn in the park before the shows. And they will produce their Theatre for Young Audiences (YTA) show, a free performance for kids and their families, A Summer’s Winter Tale, written by local playwright Nancy Steele Brokaw. YTA performances run Thursdays and Saturdays at 10 am on the Ewing Lawn beginning July 1 through August 7.   For full details, visit https://illinoisshakes.com

Nitsch Theatre Arts’ and the new Five Points Players production of the Broadway version of The Little Mermaid will take place at Five Points Washington’s Performing Arts Center July 8-11. Tickets are on sale now at http://www.nitschtheatrearts.org/box-office.html

Arc Light Theatre in Glasford will also be producing shows this summer. “I think the pandemic helped everyone remember why they enjoyed creating and going to theater and rediscover, or reaffirm our passions. We’re excited to be able to get back to a modified production schedule with steps in place to make our performers and audience feel comfortable returning to the theater,” Jeff Driscoll of Arc Light said. For more information about Arc Light’s season, visit http://arclightpro.com

The Metamora Thespian Society is still in the planning phases of their upcoming season which normally take place October – February. Updates will be available here when they are announced. Their website is https://www.metamorathespiansociety.org

Regarding area children’s productions, Children’s Community Theatre was in rehearsals for their production of Big Fish, which was supposed to be performed in December but was postponed due to COVID restrictions. The show is back in rehearsal and performance dates are July 15-18 at Peoria Players Theatre. When tickets are available, they’ll be sold online at https://www.cctpeoria.org

Nitsch Theatre Arts’ Summer Shakespeare Experience, Omelet Chef of Denmark, will be presented in July. And their summer stage production of Suessical Jr. will also be presented in August. Both shows will take place at Five Points Washington’s Performing Arts Center. For more information, visit http://www.nitschtheatrearts.org

And Chillicothe Players Youth Show which normally takes place in late May/early June is still being determined by their board of directors. When more details are available, this information will be updated.